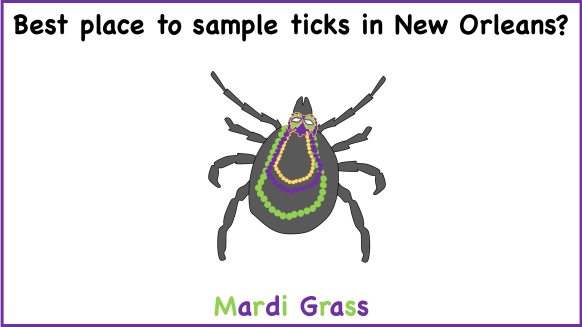 ESA 2018 in New Orleans was filled with opportunities to learn about some great parasite ecology research, meet new people, and catch up with existing colleagues. (Speaking of colleagues, Chelsea Wood won the Unofficial Parasite Ecology Cartoon Contest with her animated Haeckel parasite drawings!) ESA 2018 was especially great because there was not one, not two, but THREE organized oral sessions about parasites! Julia Buck and Grace DiRenzo (both of UCSB) kindly agreed to help me write this post summarizing the three organized oral sessions for those who couldn’t be at ESA (and for those who had to choose between sessions, since two were unfortunately scheduled concurrently).

A year ago, I watched jealously on twitter as everyone attending ESA 2017 posted about the amazing science being presented there. One tweet in particular described an invited talk by Andy Dobson, and upon reading his abstract, I realized that I needed to organize a session for ESA 2018. I decided that applying predator-prey theory to parasite-host dynamics would be a broad enough topic to attract a large audience, while still being narrow enough to have meaningful boundaries. My session was motivated by the need for more cross-talk between predator-prey and parasite-host ecologists.

I invited Armand Kuris to parasitize the first couple of minutes of my talk so that he could introduce the consumer framework in Lafferty and Kuris 2002 (TREE). Once we had distinguished the different types of consumers from one another, I delved into their direct and indirect effects. Like predators, parasites can cause DMIEs through their consumptive effects and TMIEs through their nonconsumptive effects, but unlike predators, they can also cause TMIEs through their consumptive effects. Next up, Dave Daversa presented the results of a meta-analysis on the nonlethal effects of predators vs. parasites. In general, predators elicit stronger avoidance responses than parasites, but their net effects may be similar in magnitude than those of predators because the response to parasites is integrated through time. Next up, Janet Koprivnikar presented the results of several studies that Dave included in his meta-analysis. Specifically, she found that tadpoles avoid parasites and predators, but when forced to choose between them, they prefer to forage in the presence of parasites – the less lethal threat. Although avoidance of trematode cercariae by tadpoles might be motivated by fear, Caroline Amoroso showed that parasite avoidance by lemurs might be more strongly motivated by disgust, an emotion previously thought to be unique to humans.

Next up, Kevin Lafferty presented our theoretical work on the functional and numerical responses of predators vs. parasites, showing that whether we detect the functional or numerical response depends, in part, on study scale. Mike Cortez also presented theoretical work showing that differences between predators and parasites whose victims compete for resources are due, in part, to the fact that predators are immediately lethal to prey but parasites are not immediately lethal to hosts. Next Cherie Briggs shook things up by asking where all the parasitoid talks have gone. Parasitoids are similar to predators in that they are lethal to their victims, but they attack a single host during a life stage and establish a durable relationship with it, so they are a type of infectious agent. Apparently, ecologists used to study (and publish on) parasitoids in ecology journals, but most parasitoid work is now found in entomology journals. Tom Raffel presented a fascinating comparison of the thermal biology of parasitism vs. predation – a topic I never would have considered if not for this session. Finally, Andy Dobson and John McLaughlin presented their work on parasites in food webs. Andy applied the Lafferty et al. 2015 general consumer-resource model to the Yellowstone food web, while John compared predators vs. parasites in terms of their diversity, biomass, and impact on network structure.

Overall, the attendance at and reception to the talks in this session was excellent. Despite the fact that several speakers panicked when they realized what they had agreed to (sorry!), I found these talks inspiring. Thanks to all who presented, and to Tara Stewart Merrill for moderating.

In disease ecology, there are so many statistical and mathematical models that can be used to answer a number of ecological/evolutionary questions that it can be difficult to pick “the right one”. There likely isn’t a right model – because as George Box said, “all models are wrong, but some are useful”. When I started my post-doc with Dr. Cherie Briggs at UCSB, I started thinking about compiling an organized oral session at ESA where we could learn about a bunch of cool and emerging models in disease ecology.

We kicked off the session with Monique Ambrose, a graduate student, talking to us about spillover events and R0 in monkeypox from Dr. Jamie Lloyd-Smith’s Lab at UCLA. She had very interesting methods on how to account for a number of parameters in her likelihood model – and this was one of the only wildlife applications we saw in the session along with Dr. Kim Pepin. Dr. Kim Pepin spoke to us about methods the USDA-APHIS is trying to treat the leading edge of rabies in the eastern United States with vaccines. When is the best time to vaccinate raccoons? Questions like this and others were answered during her talk.

The remainder of the talks fell into the category of vector-borne diseases. Dr. Miguel Acevedo began with a great anecdote from a class he taught, telling us that a set of students from a class did not like a host-predator model because it was too simple BUT they liked the simple output,  reminding us about the tradeoffs in complexity, realism, and interpretation. Dr. Michaela Martinez followed-up with the awesome data collection methods they are employing in their lab to understand polio outbreaks and other human diseases from medical records. And along those same lines, Dr. Felicia Magpantay explained the differences that vaccination methods can have on the number of infected hosts using simulated data.

We ended the session with an amazing presentation on integral projection models by Dr. Jessica Metcalf followed by a discussion/Q&A with Dr. Hal Caswell. This name may sound familiar because of his work on population matrix models.

In the end – it was a successful session with between 80 and 150 people in the room at any particular talk. The presenters were engaging, animated, and made the material they were discussing easily accessible to everyone in the audience, regardless of career stage. Thank you to everyone who came, participated, and tweeted!!!

OOS 33: Parasite Conservation in the Face of Global Change: Opportunities, Challenges, and Next Steps

When I told people about our parasite conservation session, most had the same questions: “Conserving parasites? Aren’t they bad? Why would you want to do that?” I’m happy to admit that some parasites are “bad” for people, our domesticated species, and wildlife. For instance, I don’t want to be infected by Guinea worm and I don’t want my dog to be infected by heartworm. But I also don’t want to get eaten by a lion, and I still think that large carnivore conservation is important. Therefore, I think that the question that we need to answer is not, “Should we conserve parasites?”, but rather, “Which parasite species should we conserve, and how will we accomplish those conservation goals?” Though parasites have historically been neglected and even persecuted by conservation research and practice, scattered groups of people have begun to tackle the pressing parasite conservation questions in the past decade or so, and my co-organizer (Colin) and I thought it was finally time to get a bunch of us in one place to try to coalesce as a subfield. Thus, roughly one year ago, the plan for the Parasite Conservation OOS was hatched! On extremely short notice, we cobbled together an international group of people from diverse institutions and career stages, and we were so pleased with the outcome at ESA! Here’s a synopsis of the session:

Giovanni Strona opened our session with a rousing discussion of community structure, community disassembly, and (co)extinction rates: he previously found that the order in which host species become extinct determines parasite co-extinction rates, and more recently, he found that removing parasites from systems accelerates biodiversity loss via a positive feedback loop, whereas reintroducing parasite species slows total biodiversity loss. But we might lose fewer parasite species than we expect if parasites can switch host species instead of going down with the ship. For instance, Jorge Doña told us that even in groups that are thought to be highly specific, like the bird feather mites that he studies, ~5% of symbionts are found on unexpected host species, suggesting that (1) the bipartite networks that we base our co-extinction simulations on might contain many stragglers; and (2) host switching deserves further study, because even though major switches are rare, they are a means by which symbionts might escape co-extinction. Speaking of specificity and host range, Tad Dallas followed with a discussion of how well we can estimate host range from host–parasite co-occurrence data, concluding that 20-40% of parasite ranges are currently unknown. Despite these big gaps in our knowledge of parasite ecology (e.g., host specificity), we might be able to use general parasite biodiversity patterns to make parasite conservation decisions. For instance, Chelsea Wood reminded us that a general law in parasite ecology is that parasite biodiversity increases with host biodiversity, suggesting that parasite and host biodiversity hotspots will coincide. However, Chelsea also showed us how fishing can decouple this classic relationship; when complex life cycle parasites are lost with their fished hosts, parasite and fish diversity are no longer correlated! And Mark Torchin showed us that unlike the classic latitudinal gradients that we see in free-living species, parasite biodiversity and interaction intensity can be higher in temperate regions.

If we already know a lot about host and parasite distributions, we can specifically model how global change will affect primary and secondary parasite extinctions, which Colin Carlson told us would be better than just relying on predictions from simulations with bipartite networks. And then I argued that no matter which kinds of models we’re using, we’re going to want to test their predictions regarding parasite extinction patterns on long-term, high-resolution host–parasite datasets; I used Chesapeake Bay fish parasites to illustrate how museum specimens might let us build those long-term datasets retrospectively. Kayce Bell followed my talk with a much broader discussion of all of the parasite museum collections available for parasite ecology and conservation research. And then Roger Jovani reminded us that not all symbionts are parasites, like feather mites that clean bird feathers (!!), and we should really embrace all symbionts for conservation purposes. And finally, Kelly Speer reminded us that symbionts even have their own hyper-symbionts, like microbes living in bat flies, and environmental changes that alter symbiont microbiomes might be important conservation considerations.

Overall, it was a very fun session, and I’m so excited for the new collaborative plans that we all put in motion.

Again, thanks to everyone who participated in and/or came to our parasite-themed organized oral sessions at ESA 2018! And if you want to schedule a parasite-themed OOS for next year, you’ll need to submit your proposal by September 13th, 2018. If you have questions about the process, we’d be happy to try to answer them!