Happy Valentine’s Day, Everyone! I only ever blog about papers that I love, and today is no exception. But in honor of this holiday, I’m going to break from tradition and blog about a paper that I love and I co-wrote, and I hope that you’ll forgive my shameless plug.

In order to document an extinction (or co-extinction), we need to know two things. First, we need to know that the species once existed. To document which species once lived, we usually rely on historical resources: fossilized remains, museum specimens, published scientific studies or surveys, and even old books/diaries/letters. But many species don’t fossilize well, and many more are too small, cryptic, or seemingly important to end up in museum collections, scientific studies, or other historical records. Second, we need to know that the species doesn’t exist anymore. Documenting the absence of a species is incredibly difficult; its only really possible via exhaustive surveying. That’s why we are sometimes pleasantly surprised when a thought-to-be-extinct species is suddenly found living somewhere unexpected, still hanging in there.

Given all of the difficulties described above, it’s not surprising that we have documented so few parasite co-extinctions! But this week in PNAS, Boast et al. (2018) published a great paper that convincingly documents the co-extinction of a few parasite species that once infected the now-extinct moa (giant flightless birds from ancient New Zealand). They used ancient DNA to reconstruct the best ever ancient passenger list for several moa species, and they were able to show that some parasite species survived to present day on other bird species (e.g., the kiwi), while others did not. You should definitely give their paper a read!

But if you want a shorter, bloggier version of the parasite story, you could also go read the open access commentary about Boast et al.’s paper that I co-wrote. It was super fun to write, because we were allowed to talk about parasite co-extinction and fossil poop at the same time, and it was especially fun because I was invited to co-author the piece by my science hero. (Thanks, Kevin!) 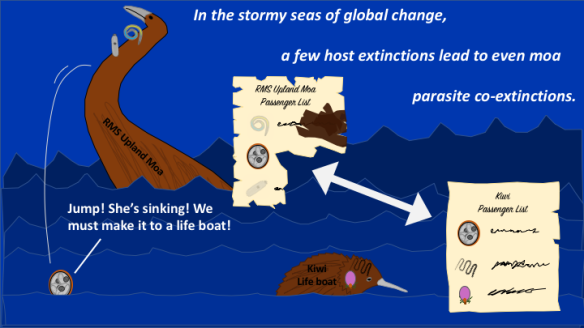