Introduction to the Debates:

There has recently been a series of papers debating the generality of the dilution effect in host-pathogen systems.  The big questions in these debates are:

Before I start talking about the debates, I need to explain why Lyme disease is such a big focus.  In 2000, Drs. Richard Ostfeld and Felicia Keesing introduced the dilution effect hypothesis to the ecological literature using Lyme disease as their example system.  Much of the subsequent work regarding the dilution effect has involved the Lyme disease system, and much of that work has been carried out by Ostfeld, Keesing, and their collaborators.  So, when someone wants to cite something about the dilution effect, they usually cite something about Lyme disease and usually something published by Ostfeld and/or Keesing.  And when someone wants to argue that the dilution effect is far more uncommon than the literature suggests, they criticize the Lyme disease work. So, my first disclaimer is that I have tried to be unbiased in summarizing these debates, but that was hard!  The two review papers are much longer than the responses by Ostfeld and Ostfeld and Keesing, so we don’t get to hear as much of their side of the debate. Therefore, we need to cut them some slack throughout. Ostfeld and Keesing are phenomenal scientists who repeatedly promote further research and discussion regarding the generality of the dilution effect, and I hope this post facilitates that goal in its own small way. My second disclaimer is that I am not Randolph, Dobson, Ostfeld, Keesing, Lafferty, or Wood.  So, I can only summarize their opinions based on what they published.  I have done that to the best of my ability. AND NOW:  MORTAL KOMBAT!!!!

I remind the audience that this cartoon is just for fun. No scientists were injured in the making of this blog post.

Randolph and Dobson vs. Ostfeld

2. Researchers are biased towards finding a dilution effect.  That bias leads people to 1) design experiments and models destined to find a dilution effect and 2) misinterpret results or mis-analyze results so that data supporting neutral or amplification effects are said to support dilution effects.  This is quite a claim!  Lest you should think I’m blowing this out of proportion, here is a direct quote from R, who thinks that there has been “an unwarranted stream of studies that either misinterpreted results in favour of the dilution effect, or sought out those idiosyncratic ecological conditions under which it might actually occur.”3 The example that RD use to back up this argument is a Plos One paper by Ostfeld et al. (2006).  Ostfeld et al. (2006) looked at 13 years of data from several field plots where measures of Lyme disease risk, climatic variables, and the abundances of mice, deer, chipmunks, and acorns had been recorded.  They found that the abundance of deer didn’t matter to Lyme disease risk at all, and climatic variables were only slightly important.  Instead, Lyme disease risk tended to be high three years after a year with high acorn abundance.  That is, acorn abundance is high one year, mouse abundance is high the next year, and Lyme disease risk is high the third year when there are lots of hungry nymphal ticks looking for hosts. RD don’t like the statistical techniques used by Ostfeld et al. (2006).  First, they argue that Ostfeld et al. (2006) had a pseudoreplicated study design that didn’t allow them to properly incorporate deer abundance in their models.  Second, they argue that the relationship between mouse abundance and infected tick density was entirely driven by a single outlier, which leaves too much riding on a single year.  You can see the full criticism of the statistics here.  Ostfeld argues that because the statistics weren’t done in a frequentist framework, the pseudoreplication argument is irrelevant.  And because the outlier was a rare mast year, it should not be removed.  You can see the full response by Ostfeld et al. here.

4. Trying to make generalizations about biodiversity and disease risk is silly.  We should really be focusing on the role of community composition in disease risk. RD spend a lot of time arguing that trying to make generalizations about how species richness or particular diversity metrics affect disease risk is silly, because community composition is likely much more important to disease transmission.  O agrees, and points out that the literature clearly designates community composition as “the most relevant metric of host diversity.”2  In other words – yeah, duh, composition is part of diversity, and everyone knows that it is important.  I think RD’s point is that if preserving pristine habitats with high biodiversity isn’t enough – if it depends on exactly what species occur in those highly biodiverse systems – then we should make that very clear when we suggest that ‘preserving biodiversity’ is a good way to manage disease risk.  For instance, it might not be as important that there are five vertebrate host species, but that one of those species is the opossum, which is not a good reservoir host and tends to groom off and eat ticks.

5. The dilution effect doesn’t always happen.  It only happens under very specific conditions, and those specific conditions may rarely arise. The dilution effect literature very carefully outlines the conditions under which a dilution effect is predicted to occur.  RD question whether those conditions actually happen in real systems.  I already discussed the density/prevalence condition above.  RD also “question whether increased richness will usually involve a greater proportion of transmission non-competent host species.”3  This is in reference to Condition 4: the most resilient host species – the ones that are left in low biodiversity communities – must also be the highly competent host species (and vice versa). Ostfeld points out that this is an ongoing area of research.  Are highly resilient species usually highly competent?  You can see some recent high-profile studies here and here.

But hey, who is to say that my panel of judges rules supreme?  I open the voting up to YOU, my wonderful audience.  Who won?! 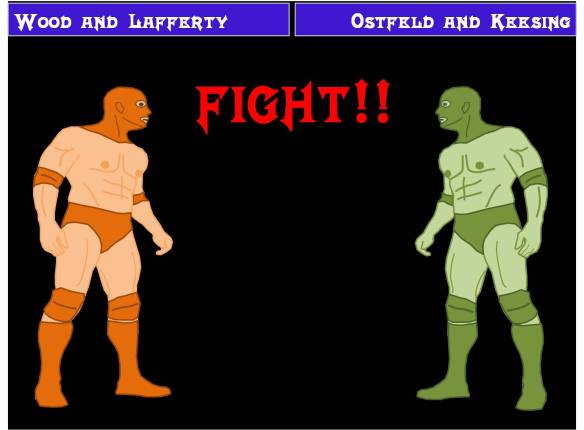 WL’s Synthesis: WL present a synthesis of two ideas regarding how biodiversity affects Lyme disease risk: the “traditional perspective” and the “dilution effect perspective.”  To understand their synthesis, we need to discuss four things:

How can we use forestation as a proxy for biodiversity?

What is the “traditional” perspective?

Lyme disease (re)-emerged as an important infectious disease of humans in the United States in the late 1970’s.  Though Lyme disease had existed in the US long before the 1970’s, there was a period when ticks and Lyme disease were not widespread.  Where did the ticks go?  Well, ticks are ectoparasites than live on forest animals.  So, if we remove forests – say, by cutting down forests to make way for agriculture  – there should be no ticks and thus no Lyme disease risk (see the origin on the figure below). Similarly, you’re much more likely to contract Lyme disease in a rural area than an urban area.  This is the “traditional perspective.”  No forests = no ticks = no Lyme disease risk, so forestation and/or biodiversity must amplify Lyme disease risk.

What is the dilution effect perspective?

How can we synthesize the two perspectives?

Heyyyy, wait a second!  How can host diversity both amplify and dilute disease risk?  Well, that’s WL’s point, exactly.  They argue that it is mostly an issue of scale.  At broad spatial scales (i.e., rural vs. urban), biodiversity amplifies disease risk – that’s the “traditional perspective.”  At fine spatial scales (i.e., forest patches), biodiversity dilutes disease risk.  They argue that this should lead to a linear, saturating, or hump-shaped relationship between biodiversity and Lyme disease risk, depending on how much of a role the dilution effect plays.  So, as you go from a completely unforested area to a somewhat forested area, you’ll see an increase in disease risk.  But as you go from a fragmented forested area to an unfragmented forested area (continuing right on the X axis), you might see a decrease in disease risk, if the dilution effect happens.

OK didn’t like WL’s synthesis of the two Lyme disease perspectives.  I would recommend reading their whole response, because it’s only one page, and you can access the PDF here for free.  But for those of you who want the less-detailed tl;dr version: OK argue that the logic for the “traditional perspective” is “fallacious”; they think that concluding that Lyme disease risk increases with forestation/biodiversity just because having no forests would result in no Lyme disease is ridiculous.  But WL argue that it isn’t ridiculous at all; locations with literally no forests are real places, and those places don’t have Lyme disease risk.  OK also argue that there isn’t any evidence that Lyme disease risk increases with biodiversity, but I think WL would argue that all of the studies regarding the “traditional perspective” are evidence for a positive relationship.  WL also argue that at global scales (i.e., tropical vs. temperate regions), you see the same positive relationship between biodiversity and disease risk.

Is the dilution effect more common than amplification and neutral effects?

In their introduction, WL summarize the review paper by RD, where RD suggest that Lyme disease proponents ‘preach’ that biodiversity always dilute disease risk.  Again, OK point out that no researchers ever argue that the dilution effect is universal.  And again, OK argue that “current evidence that high diversity dilutes far more often than it amplifies, at scales from local to global, is strong [5–7].”2 Lafferty and Wood strongly disagree!  In fact, most of of the WL response to OK is about that one sentence.  First, like RD, WL argue that the three papers that OK cite to support their claim don’t support the claim at all.  Second, WL argue that OK also didn’t cite some recent meta-analyses that found that 1) the dilution effect is idiosyncratic, and 2) there is a publication bias towards dilution effect studies*.

But what do YOU think?

The Future of the Dilution Effect:

So, have these debates resolved anything?  Is the dilution effect hypothesis smashed to smithereens?  Not exactly, but it does seem like the evidence for a strong, common dilution effect is iffy.  Hopefully the debates will lead to major progress in this area, and less of a publication bias in the future.  My reading group also talked about data/studies that we’d like to see in the future.  This is what we came up with:

9 thoughts on “The Dilution Effect Debates”