Despite nearly one year’s worth of posts about parasite ecology, this blog has never defined the term ‘parasite.’  D’oh!  You might think, “Pft, the definition is obvious!”  But actually, it isn’t, and it isn’t without controversy, either.  I’m going to talk about a bunch of types of natural enemy, and then I’ll present a really good dichotomous key at the end.

1)      One predator eats multiple prey during the predator’s lifetime.

You’ll notice that I said that predators “tend to” be bigger than their prey and “tend to” kill their prey.  They don’t always!  A very good example of this is a vampire bat that takes blood meals from cows.  A single vampire bat will take blood meals from multiple cows during its lifetime.  It is eating multiple prey, therefore, it is a predator.  But it doesn’t kill the cows, and it isn’t bigger than them.  It’s a micropredator.

Parasites are different from predators because parasites only take resources from one host, whereas predators eat many prey.  A good example of this is the trematode parasite Schistosoma mansoni.  An adult schistosome parasite lives inside of just one human host.  It is never going to crawl out and go infect a different human.

You might be thinking, “Waaaaait…  Schistosoma mansoni has a complex life cycle!  It infects humans AND snails!  That’s two hosts!”  Yep.  But the rule is that parasites only infect one host during each stage of the life cycle.  One human.  One snail.

Here are some other common characteristics of parasites:

Ok, so, the killing bit is confusing and wishywashy.  I’ll come back to it below.

Like a parasite, a parasitoid infects just one host per life stage.  But parasitoids always kill their hosts.

So, what’s the difference between a parasite and a parasitoid?  If you’re about to take an exam or something and you want a quick answer, say that parasitoids always kill their hosts and parasites don’t usually kill their hosts.  You’ll find that in many introductory ecology textbooks.

In practice, we don’t really use that definition.  The term parasitoid is usually applied to certain insects that have free-living adult stages that lay eggs inside a host, and the eggs go on to parasitize and eventually kill the host.

There are many “parasites” that always kill their hosts, and we still call them parasites and not parasitoids.  Why, Scientists?  Why do you do this thing?  Well, it just doesn’t make sense to have a rule that says that parasites don’t kill their hosts.  For instance, if a parasite (say an acanthocephalan) in an intermediate host (a pillbug) makes the host more likely to get eaten by the next host (a bird) in the life cycle, then the parasite is often the cause of the host’s death.  Those kinds of parasites are called trophically-transmitted parasites.

Lafferty and Kuris (2002) came up with a really nice dichotomous key for classifying natural enemies.  They used four dichotomies, but I’m only going to use the first three:

1. “Does the enemy attack more than one victim?”

2. “Does the enemy eliminate victim fitness?”  (‘Eliminating fitness’ could be killing the victim or sterilizing the victim so that it cannot reproduce.)

3. “Does the enemy require the death of the victim?” 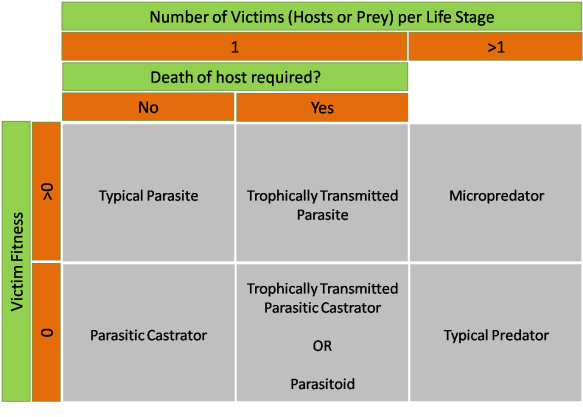 Figure adapted from Lafferty and Kuris (2002) – link below.

You might remember from one of my previous posts that we tend to divide parasites into microparasites and macroparasites.  As I described in that post, for microparasites, we care about presence/absence of infection, and for macroparasites, we care about intensity of infection.  The fourth dichotomy used by Lafferty and Kuris (2002) is “does the enemy cause intensity-dependent pathology?”  They include the fourth dichotomy in their figure.  It’s really useful, but I didn’t include it here to avoid confusion. Click the PDF link below to see their version.