In the past year, I have had so much fun sharing really cool parasite ecology with you guys.  Many thanks to everyone who has visited, followed, shared, commented, and/or given me feedback!  You’re awesome! For this birthday post, I’m writing about one of my favorite parasite ecology papers, which is about one of my favorite parasites: nematomorphs!

Now, I could spend at least 3000 words telling you every awesome thing that I know about nematomorphs, which are also called Gordian worms and hairworms.  Instead, I’m going to urge you to google nematomorphs.  They have an especially interesting life cycle, and you should click through to see some of the related photos and videos.  The larval nematomorphs  infect an aquatic invertebrate (like a damselfly larva or a snail); that invertebrate then ends up on land, dies, and the invertebrate’s tissue and the larval nematomorphs are consumed by a terrestrial invertebrate like a cricket; the nematomorph grows into an adult within the cricket and then it manipulates the cricket’s behavior to cause the insect to jump into a body of water; the adult nematomorph emerges from the cricket in the water and swims around looking for an adult of the opposite sex; finally, the adults mate and the females lay eggs.

In an earlier paper, Sato et al. (2011) found that crickets infected with nematomorphs were 60% more likely jump in Japanese headwater streams than uninfected crickets.  And these crickets were an important part of the diet of endangered trout.  In fact, the trout ate so many crickets during the nematomorph breeding season that the trout ate significantly fewer benthic invertebrates than usual.  This raised an interesting question: does the manipulation of crickets by nematomorphs have cascading effects on energy flow in stream ecosystems?

Sato et al. (2012) then performed an experiment in headwater streams that typically have few crickets where they 1) added dead crickets to the streams as a resource subsidy, 2) prevented just crickets from jumping in the streams, or 3) prevented all terrestrial invertebrates from entering the streams.  They found that both big and little trout ate more crickets when they were added to the stream.  And little trout then ate fewer benthic invertebrates in those streams, just like they saw in Sato et al. (2011).  Furthermore, in the streams where crickets were added, there was less benthic algae and faster leaf decomposition because there were three times more benthic invertebrates in those streams.  So, it does look like the added cricket resources can have far-reaching effects on headwater streams!  I can’t wait to see the diffeq model of this… it’s coming, right?

Sato et al. (2012) point out that there is also some evidence from other systems where parasite manipulation has far-reaching effects on energy flow in ecosystems.   I expect we’ll be seeing a lot more research on this topic in the future! 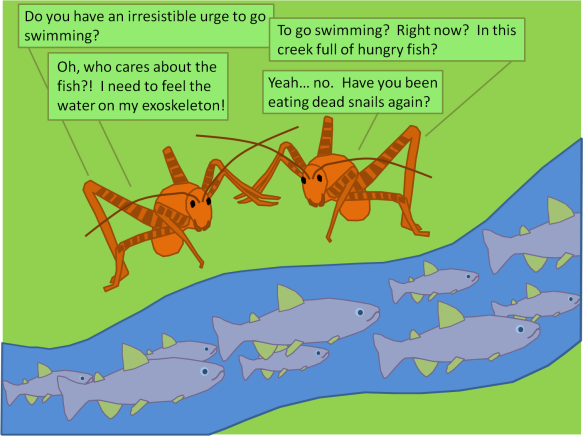 I couldn’t make these crickets not look sinister…

For a very recent study about nematomorphs, see the Parasite of the Day‘s post about Sato’s 2014 paper.