This is one of several posts that I’ll write about the Ecology and Evolution of Infectious Disease conference (EEID).  I’m starting with the very first talk at the conference, because I’m not feeling particularly creative, and chronological order is my default.  🙂

But what if the pathogen mostly hangs out in your cells, and antibodies won’t cut it?  This happens with many pathogens that have persistent infections, like HIV and malaria.  As you know, we don’t have vaccines for malaria and HIV, because these antibody-type vaccines won’t work (yet? ever?).

People are working on a different type of vaccine, called a T-cell vaccine.  T-cells are immune cells that find and kill host cells that are infected with pathogens.  The hope is that T-cell vaccines will better enable T-cells to recognize infected cells.

But here’s the problem.  Some people have found that vaccines for these pathogens that hang out inside of cells can actually cause disease/pathology.  That is, individuals (e.g., mice) have greater pathology when they are exposed to a pathogen after being vaccinated than if they hadn’t been vaccinated.  (Note:  I’m talking about vaccines that are still being developed, not ones that we currently use.)  Obviously, we can’t develop useful vaccines until we figure out why they may be increasing infection and causing pathology.

To work on this, Johnson et al. (2011) made a model (which parallels experimental data) of lymphocytic choriomeningitis virus in mice.  What they found was that at low and high densities of T-cells, pathology was low.  But at intermediate levels of T-cells, pathology was high.  In this case, “pathology” was measured in terms of the number of functional host cells, where few functional host cells means high pathology. 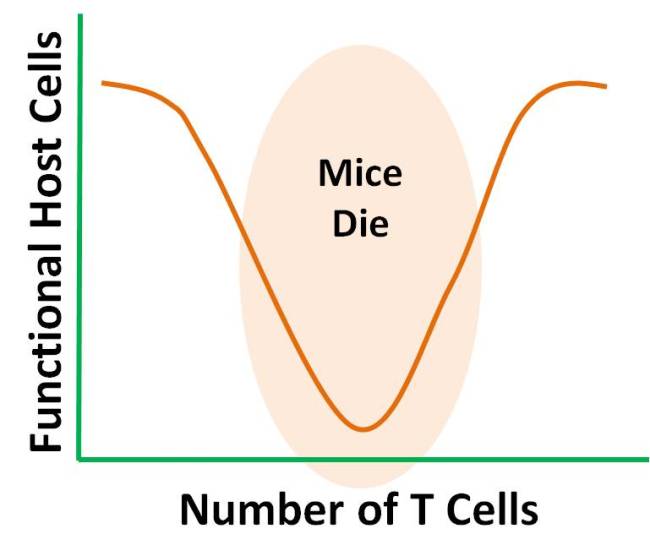 My cartoon of Rustom Antia’s graph.

So, there you have it.  Now, since this isn’t my area of expertise, I recommend checking out the paper that Rustom based his talk on to find out more.

What do you think?  Will we figure out how to use T-cell vaccines in the near future?