For symbionts, transmission is dispersal. When free-living species (e.g., lions, aphids, and ducks) disperse, we expect them to have dispersal strategies that have been favored by natural selection; they should leave habitats where fitness prospects are low and preferentially disperse to habitats where fitness prospects are high, as long as the fitness benefits outweigh the costs. Logically, symbionts should also move from low quality to high quality habitats, where the “habitats” are hosts or locations on the host. However, we almost always assume that symbiont transmission/dispersal is a random process with a fixed rate. That is, we assume that host quality or site quality on the host doesn’t matter. But guess what? IT DOES MATTER. And you can read all about it in my favorite symbiont ecology paper from 2015! I’ll summarize it for you here:

The branchiobdellidan-crayfish symbiosis is one of my favorite symbiont-host systems, so I’ve blogged about it several times previously (e.g., here and here). In contrast to the Chaetogaster-snail system that I talked about last week, it’s relatively easy to measure branchiobdellidan fitness, because the branchiobdellidans lay cocoons on their crayfish hosts. Adult branchiobdellidans stay nearby and tend their little cocoon gardens (adorable!), so it’s easy to quantify each worm’s reproductive output.

But it gets better. Using the field survey data, Skelton et al. (2015) built a symbiont fitness-based dispersal model that incorporated crayfish size and microhabitat occupancy and quality, where there was some fitness threshold below which worms would disperse from donor to receiver crayfish. Then they ran a lab experiment where they put donor crayfish (with worms) in tanks with receiver crayfish (without worms), and counted how many worms dispersed and where on the hosts the worms ended up. Skelton et al. (2015) didn’t know what the worm fitness threshold was, so they used a model fitting procedure to figure out which threshold produced the best fits to the experimental data. The resulting fitness-based dispersal model could predict whether worms would disperse with 95% accuracy. 95% ACCURACY!! And 67% of the time, the model predicted the exact number of worms that dispersed. In contrast, the model that assumed a fixed rate of dispersal – with no influence of host size or microhabitat occupancy – couldn’t predict dispersal any better than a null model. When’s the last time an ecologist predicted something with 95% accuracy?!

So, you know how sometimes you see another scientist’s work and you get ‘system envy’?  How you suddenly realize that everything about their system is amazing, and you want to switch to work in their system right now?  Well, today I’m going to introduce you guys to a really, really cool system, and then I’m going to do a mini-series of posts about some of the recent work that I’ve seen regarding this system.

OK, READY?  There aren’t many relevant videos on the internet, but I want you to click this link to go see some really cool worms on youtube.  And if you want to see an even more amazing video, you can click here to download it. (It is seriously worth it.)  And for pictures, check these out. 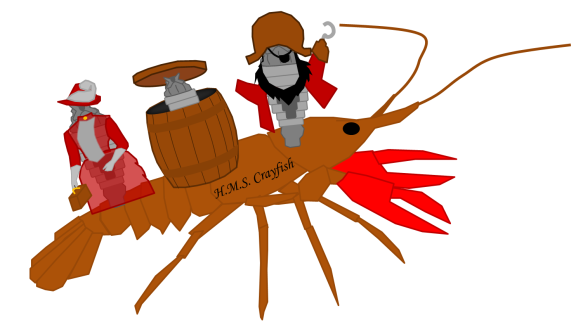 Are branchiobdellids mutualists, like passengers who pay for their voyage? Are they commensalists, which get a free-ride but don’t harm their hosts, like stowaways? Or are they pirates, which board the crayfish ship by force and loot the crayfish booty? And perhaps more importantly, are there support groups for people obsessed with dressing worms up in fancy costumes?

Until then, check out this review about branchiobdellidans that just came out in Freshwater Science!