To explore this possibility, Ryder et al. (2014) made a really pretty model to explore how female biased sex ratios might influence parasite epidemics. They found that female biased sex ratios result in “male first” epidemics, where mite epidemics happened faster in the male population than the female population. Then Ryder et al. (2014) observed a bunch of mite epidemics in areas with and without male-killing bacterial symbionts. And guess what: in the areas with male-killing symbionts, there were male-first mite epidemics, while in areas without male­-killing symbionts, male and female lady beetles had similar epidemic dynamics. Beautiful!

There is a lot more cool stuff in the paper, so go check it out! You should be at least a little bit jealous of how much data they had from experiments and field surveys. I know I am. 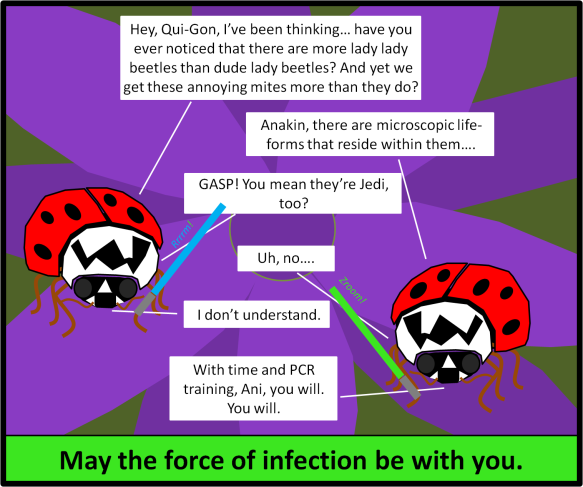 [My nerdiest cartoon yet? Perhaps.]