Observing transmission events – and knowing that you just observed a transmission event – can be really tricky, but it’s a really important step in understanding parasite ecology in any given system. For instance, last week I talked about the Mg pathogen that causes conjunctivitis in house finches, and I told you that the pathogen might be transmitted among birds via bird feeders (=fomites). This possibility is corroborated by evidence that the number of direct contacts made by individual birds didn’t influence the probability of infection; that is, bird feeders seem more plausible than bird-bird contacts. But it’s still hard to say that Mg is never transmitted by direct contacts between birds, or how often that kind of transmission might occur. And that’s in a system where they’ve really spent a lot of time figuring out how the pathogen is transmitted!

Another good example is of this uncertainty in transmission routes comes from gastrointestinal pathogens. Pathogens that cause all kinds of diarrhea seem to be utilizing a strategy where they get out there and contaminate the environment and thereby make contact with other potential hosts. Based on that idea, we usually assume that fecal-oral transmission is really important to gastrointenstinal pathogens, whereas direct contacts among hosts are less important. Is that really true?

In a recent study, Blyton et al. (2014) quantified how long pairs of possums hung out at night, whether they were pair-bonded (=sex presumably happened), whether they shared dens during the day, and how much spatial overlap they had in their ranges. They related those potential drivers of transmission to the probability that the possums shared strains of non-pathogenic E. coli. Surprisingly, spatial proximity wasn’t important to strain-sharing, but the total time that pairs spent interacting was important, which is counter intuitive for transmission based on environmental contamination. But Blyton et al. (2014) posit that the most important kinds of contacts were brief nocturnal associations, rather than all-day den sharing or long-term pair-bonding. That’s seems really crazy, until you remember that possums probably aren’t defecating in their dens. It might be that the brief nocturnal associations are likely to result in contact with fresh, contaminated poo and E. coli transmission than den-sharing or simply living near an “infected” possum. Neat! But notably, we still don’t know exactly how E. coli is being transmitted in that system! 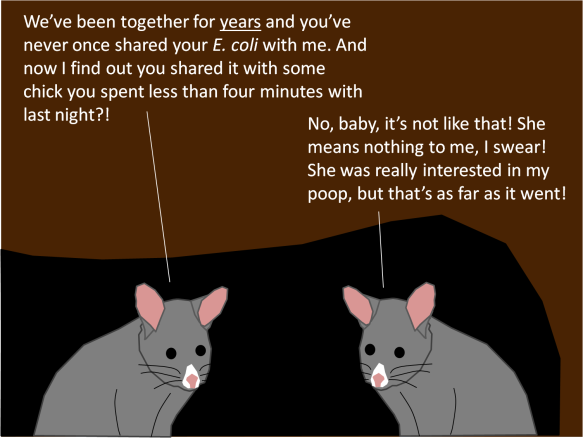 Anyone have any other notable examples of pathogens whose transmission routes we haven’t totally figured out yet? Here are two examples from systems with vector-based transmission:

What is the predominant transmission route by which prairie dogs contract the plague?

What was the predominant transmission route by which humans contracted the Bubonic plague?

2 thoughts on “Do you REALLY know how parasites are transmitted in your system?”