Mutualisms are kind of a big deal.  In fact, our very existence depends on mutualisms.  From the pollinators that service our crops to the bacteria that help us digest our food, we just couldn’t survive without them.

Since mutualisms are so important, you might expect us to know a LOT about them.  But we don’t know as much as you might expect.  For instance, we don’t really understand how mutualisms are maintained in the long-term.  Theory predicts that at least some mutualists should cheat, because cheaters should have better fitness than perfect cooperators.  That is, mutualists should be like that used car dealer in Matilda that glues on the car bumpers.  We know that there are cheaters in many mutualisms – like in marine cleaning mutualisms – but something prevents all the mutualists from cheating.  Something prevents cooperation from evolving into parasitism.

That “something” may be partner control.  Partners can reward or punish their mutualists for good or bad behavior, thereby selecting for the mutualists that sell good cars don’t cheat.  But as I mentioned before, the benefits of having mutualists aren’t constant across all ecological conditions.  In fact, sometimes, mutualists can even act like parasites.  So, partner control may need to vary with ecological conditions.  Thus, enter this really cool branchiobdellidan-crayfish study by Skelton et al. (2014). 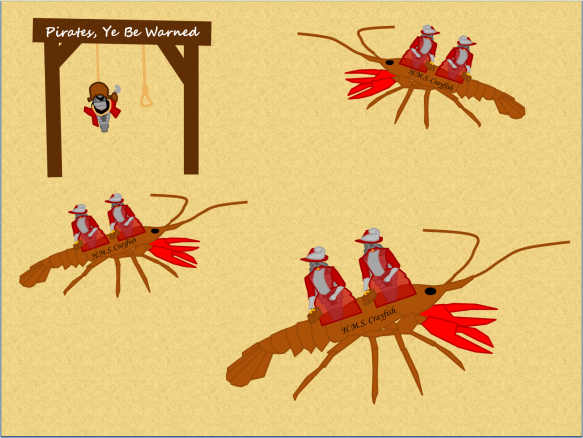 Pirate worms will be groomed off and eaten on sight!

Skelton et al. (2014) wanted to know if crayfish were less resistant to branchiobdellidans – if they varied how much they controlled their worms – when the crayfish were bigger.  When crayfish are small, they molt frequently, so there isn’t much time for epibiotic material to accumulate on the crayfish.  Having cleaning worms probably isn’t very useful for small crayfish.  But when crayfish get big, they molt less frequently, so having worms around to keep them tidy might be very beneficial.  Therefore, Skelton et al. (2014) performed three experiments where they looked at how crayfish responded to worms when the crayfish were small, intermediate, or large in size.

NOW FOR THE COOLEST PART.  Crayfish ‘control’ their worms by grooming them off (and eating them).  They just reach up with their little walking legs and pluck the worms off.  To experimentally manipulate crayfish grooming, Skelton et al. (2014) just snipped off the dactyls on the walking legs so that the crayfish couldn’t pick off their worms.  That is, in each experiment, there were control crayfish with functional pinchers and other crayfish with their dactyls removed.

Small crayfish strongly resisted worms.  As soon as they had worms put on their backs, the small crayfish started trying to groom them off.  And by the end of the experiment, there were almost no worms remaining on small crayfish if the crayfish had their dactyls intact and could groom themselves.  Intermediate-sized crayfish reacted similarly, but by the end of the experiment, they still had 25% of their worms, even when they could groom themselves.  Conversely, big crayfish liked their worms – when they had their dactyls, they groomed off a few worms during the experiment, but they mostly allowed the worms to hang around.  So, large crayfish had very low resistance to worms, but smaller crayfish had very high resistance, and that’s probably because larger crayfish need the cleaning services, whereas smaller crayfish don’t need the cleaning services.

I have a better cartoon of this, but I’m going to wait until next week.  Stay tuned!

3 thoughts on “Host Control of Symbionts”