This week, I wanted to post about a paper that was just too sexy to resist blogging about.  However, as I was writing my post, I stumbled across Jeremy Yoder’s even better post about the paper.  So, you should click through to the Denim and Tweed blog, read his post, and then admire my only best attempt at drawing a flea.

Gerbils infested with high densities of fleas left food patches at higher giving up densities than gerbils without fleas.  And when gerbils had fleas and a fox was present, the gerbils left food patches at the highest giving up densities.  So, fleas distracted/irritated gerbils so much that the gerbils spent less time foraging for food, and that change in foraging behavior was amplified when both parasites and predators were present.  In a world full of things trying to eat gerbils, how’s a gerbil gonna eat?

Here are some things that I liked about this paper: 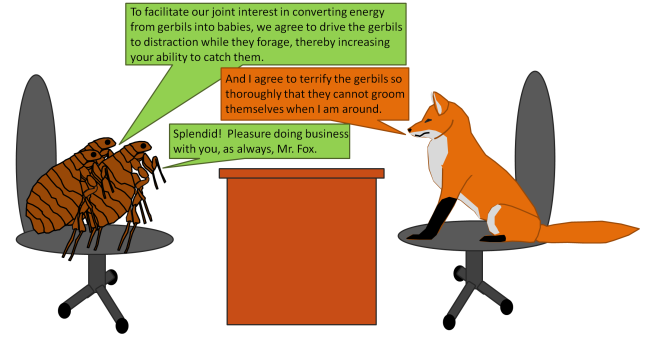 Raveh, A., B. P. Kotler, Z. Abramsky, and B. R. Krasnov. 2011. Driven to distraction: detecting the hidden costs of flea parasitism through foraging behaviour in gerbils. Ecology letters 14:47–51.