Continuing on my not-parasite-but-kinda-similar trend, let’s talk about bacteria and phages.  This post was stimulated by a really cool talk by Britt Koskella, from the University of Exeter.  She has a wordpress site and has been tweeting about the EEID conference, so head that way for more cool stuff.  (Maybe she’ll also come correct places where I butcher her work.)

A bacteriophage is a virus that infects bacteria.  In Britt’s case, the bacteria of interest are parasites of the horse chestnut tree.  She studies the co-evolution of these three groups: the trees, the bacteria, and the phages.  Importantly, because these organisms/phages have very different life spans, we expect phages to evolve faster than bacteria, which should in turn evolve faster than trees.

Question 1:  Do we see local adaptation of phages to the bacteria of a given tree?  Answer:  Yep!  If you take leaves from multiple trees and culture the bacteria from those leaves, and then test all the phages on all of those bacteria cultures, you find that phages do best on bacteria from the tree that they were collected on.  Also, phages did better on bacteria from the interior of the leaves, which makes sense because the exterior is likely highly controlled by abiotic processes (e.g., UV radiation).

My cartoon of Britt’s graph. Phages are more successful at infecting bacteria from the tree they were collected on (sympatric tree) than other trees (allopatric trees).

Question 2:  Given that we see local adaptation of phages to bacteria, does that adaptation vary with time?  Answer:  Yep!  In this part, Britt calculated “local adaptation” as an index comparing phage success on bacteria from sympatric vs. allopatric trees.  She cultured bacteria from trees from each month in the season, and tried the phages from the last month on all of those cultures.  Does that make sense?  So, September phages on September bacteria, September phages on August bacteria, September phages on July bacteria, etc.  Here’s what she found: phages were most adapted to the bacteria from the previous month (=August), and then adaptation declined as you went further back in time.  She suggested that this is demonstrative of fluctuating selection, rather than an arms race between bacteria and phages.  That is, in an arms race, you should never see a decline in phage success as you go backwards in time.

Phages are most adapted to the bacteria of the prior month, and then adaptation declines as you continue backwards in time.

So, that was a lot about the phage evolution, but what about the bacteria?  Question 3: Do bacteria evolve resistance to phages?  Answer: Yep!  Since she had all of those monthly bacteria  and phage samples, she tested bacterial resistance to phages that were from the past time step, the present time step, and the future time step.  Bacteria were most resistant to past phages, indicating that bacteria evolve to resist their phage.  They were least resistant to phages from the future, which indicates that phages also evolve to better infect bacteria.  Neat!

(Edit: Check out Britt’s comment below about whether this pattern is the result of pairwise coevolution or species sorting.  More coolness to come!) 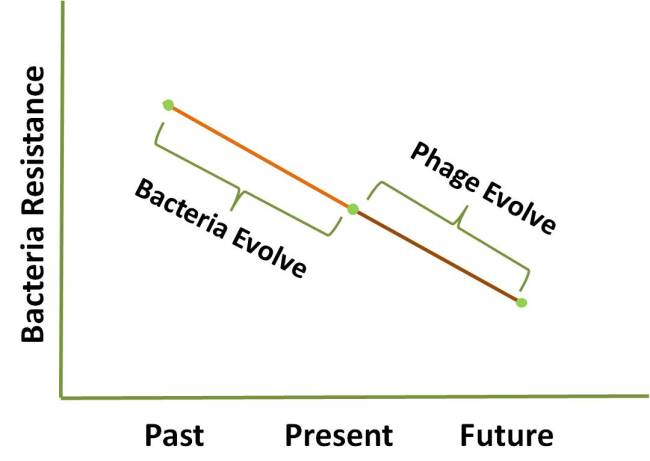 All of the parasite-host co-evolution stuff is super cool.  Britt also looks at co-evolution in other disease systems, and you can check out some of that work here.

Don’t you really, really want to do experiments where you’re looking “into the future?”  Futuristic snails must be awesome.  I’m sensing an upcoming cartoon…