One big interest in parasite ecology right now is the quantification of parasite biomass in ecosystems.  Ecologists have spent a lot of time looking at energy flow through ecosystems and quantifying how much of the total biomass in ecosystems can be found in each trophic level and taxonomic group.  Until recently though, no one had quantified parasite biomass.  But since parasites eat a little bit of just about everyone, they might add up to a big chunk of the total biomass, right?

The initial work regarding parasite biomass in ecosystems came from three California estuaries.  There are several cool papers that have already stemmed from that work, and if you’re interested, you should check out the publications from the UCSB Ecological Parasitology Lab.  Lately, the Johnson Lab has been tackling the parasite biomass question in ponds by studying trematode parasites, specifically.

Remember when I said that parasites eat a little bit of everyone?  Well, according to Preston et al. (2013), if you’re a first intermediate infected rams horn snail (genus Helisoma), you’re actually 25% trematode larvae, on average.  That’s NUTS.  That’s like a human having an entire leg made out of parasites.  Because ~30% of snails were first intermediate trematode infected in ponds, roughly 2-4% of the total biomass for that snail species was actually trematode parasites.  NEAT!

Overall, the dry trematode biomass in the ponds was ~0.1 g per meter squared.  That was roughly equal to the dry biomass of beetles..and the dry biomass of odonate larvae (dragonflies and damselflies)…and the dry biomass of hemipterans.  In other words, there were a lot of parasites!  Preston et al. (2013) estimated that ~0.1 g of cercariae (just one trematode stage) would be produced per meter squared per summer.  Like I mentioned in a previous post about how cercariae get neglected from inclusion in zooplankton studies, all those cercariae make a great food resource for hungry aquatic predators! 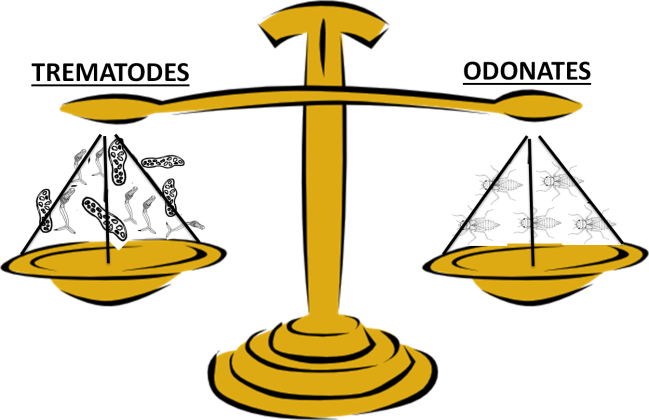 Larval trematode biomass is equal to that of odonate larvae in ponds. (I know what you’re thinking. You’re thinking that I spent <5 minutes making this picture. You are correct.)

Ok, one last neat thing.  Preston et al. (2013) found that there was a negative relationship between the size of the cercariae (which varies by trematode species) and the number of cercariae that were released by a snail within 24 hours.  Preston et al. (2013) weren’t the first to discover this, but I still think it’s a very cool trematode example of evolutionary trade-offs between producing many offspring and big (high quality) offspring.  If you’re going to produce relatively small cercariae, you can produce a lot of them.  But if you want to produce big, energy rich cercariae, you can only crank out a few per day.

So far, we only have data for systems where aquatic trematodes (in snails) are a huge component of the parasite community.  What ecosystem should we quantify parasite biomass in next?